Founded in 1997 by Pascal Ravach, Mutine is a distribution company, careless of fads, devoted to musical High-Fidelity,
One unique goal: allowing music lovers to live an intense emotional experience, a total musical immersion, "seeing" alive musicians... music, not "sound"...
This approach, still rare, shared by few professionals in the world, requires much time, dedication, rigor, also courage, to confront disinformation and the perverse effects of modern marketing... but the result is worth all efforts.

Present, past and... always 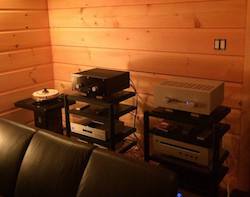 s
Since 2008, a very special house is being built in the Laurentian mountains North of Montreal.
A bio-healthy house, solar, passive geo-thermal, fully ecological but still traditional-looking.
Two auditoriums, a lab, storage, a guest's suite... quite a project, requiring many explorations in a still unknown domain!
The first auditorium was finished in 2015.
The second one, the largest, will be ready for Winter 2018-2019. 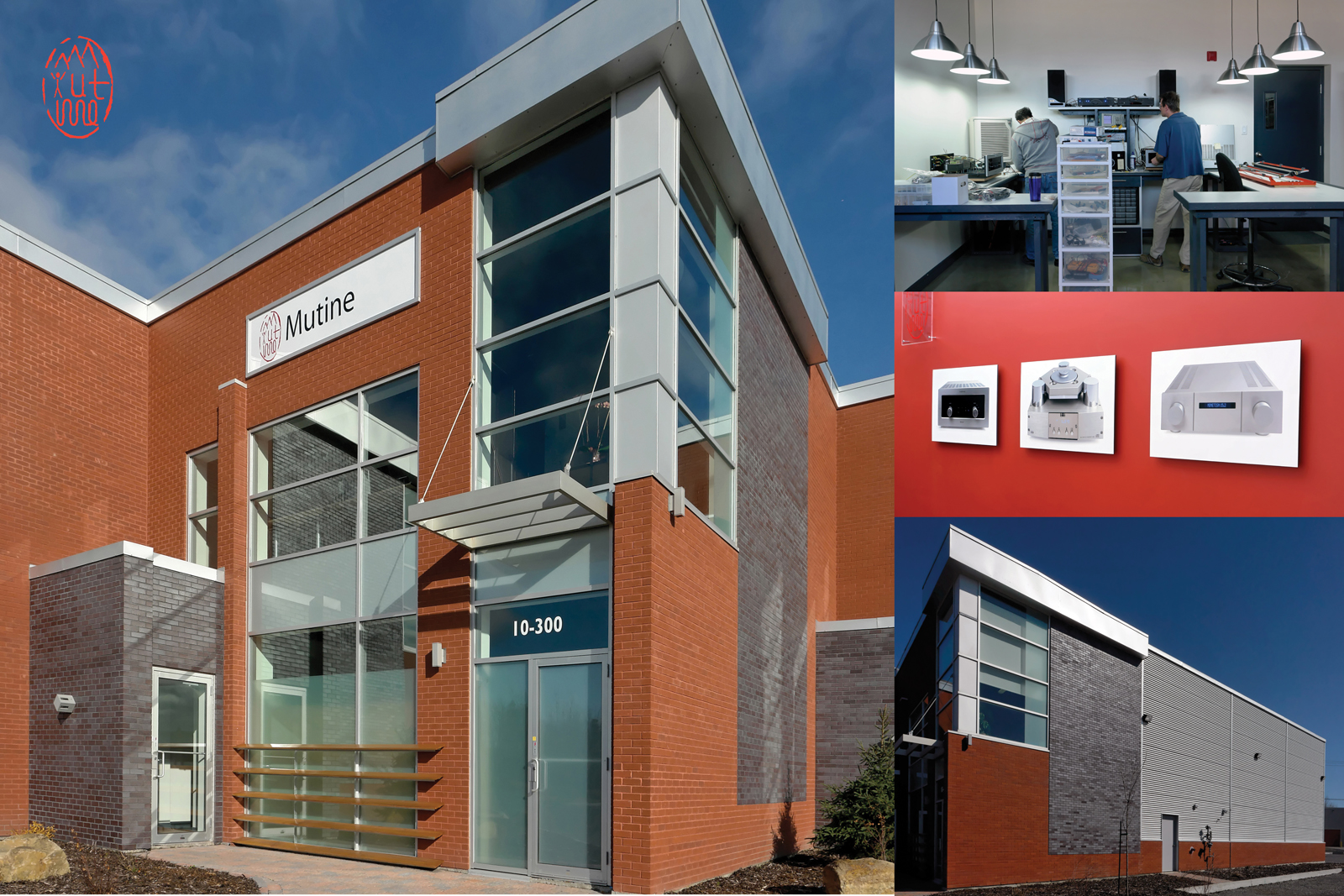 1980: manager of a competitor's auditorium.
Propose, amongst other brands, Thorens, Rega, Logic, Linn, Nad, Naim, ESS, JMR, Jean Maurer, Nakamichi... and I forget a lot.
Purchase of 2 pairs of ESS Transar 1.
Meeting with Oskar Heil, inventor of the AMT; he proposes me to join him in his California lab... sadly, I never got the time until his passing in 1994.

1984: Creation of Presence Audio, hi-fi store, in Lausanne. This becomes an instant success, with 311 systems installed in 18 months, just through word of mouth! I sold it in 1986 when I became a JMR distributor, this store still exists, now in Geneva.
Story: Stefan Kudelski, the founder of Nagra, visits "Présence" to test his CD Player prototype; CDs were not yet on the market. Marcel Cellier came too; with his LP "Le Mystère des Voix Bulgares" and a version put on a CD by Stefan. The listening session on the Vecteur turntable made the CD player sound so miserable that Stefan decided to postpone its release (Kudelski would eventually release it in 2007).

1987: creation of the German distribution company, Lys GmbH, in Heidelberg.
Move from JMR to Équation.

1988: Acquisition of majority shares in Oxford Audio Consultant (distribution) and in Oxford Acoustics (manufacturing) in England.

1990: my group is present in several European countries, develops fascinating products, and has a staff of 19 full-time people.
Equation is the first commercially-distributed product having used serial filters and the famous German ceramic drivers.
Oxford Acoustics creates such innovating and gorgeous looking products that the British press calls us "the B&O of the audiophiles"...

1991-1993: a family event, added to my second burn-out (you can't work 120 hours per week without paying the price) push me to eventually stop all operations and give my 4 companies.
I decide I will never more work so much, and that if later I come back to High-Fidelity I'll run a small company.

1993-1995: 2 years studies at Geneva University; musicology, linguistic, sinology. Wonderful years... if I could spend my life studying, I would do it!

1997-1998: foundation of Mutine Inc. in Canada and Mutine Corp. in the US. Exclusive distributor for actinote, Audiomat, Equation.
Attempt to start slow, but the N-A market is a nervous one... very fast success, mostly with Audiomat.
14 reviewers equipped with Mutine products... purchased, not loaned as nearly always!

2000: Audiomat France cannot deliver enough for our markets.
Since I have already a manufacturing experience with Oxford Acoustics, they propose that we build the amplifiers and phono preamplifiers here in Canada.

2001: we manufacture Audiomat products, under licence, first in Laval, then in a superb building in Blainville, QC.
The North-American network develops, reaching around 110 dealers, including five we consider the best.

2005: Equation asks us to take over the R&D and manufacturing of their loudspeakers line; we start developing the next generation.

2007: Christian, Equation's creator, looses interest in Equation... he has discovered Duevel.
It takes me one year to be convinced (hence the 2007 FSI exhibition with Équation... and the 2008 one with Duevel).

2008: I take my semi-retirement, to resume the geopolitical work of my father, and to start my long-dreamed project: building a bio-healthy, low carbon-footprint house for me, with dedicated auditoriums, a lab, storage, a guests' suite for my customers, a photo studio and office spaces.

2015: the first auditorium is opened.

2018: the construction of the second auditorium has started.

Top of the page.

The Art of Listening 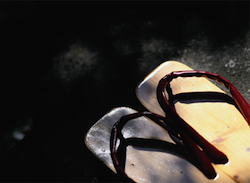 Music is mainly the organisation of Silence

Most of the time they hear only.

It implies being focused on this sole action. Not distractedly surfing the Net, or reading or anything else. Listening implies using all the senses. Listening means more than to perceive sounds; it implies decoding them. It also implies assigning significance to them, seeking their deeper meaning and letting resonances blossom deep down inside us.

To listen is to be available.

Opening ourselves to the music. Dropping our masks, leaving our worries behind. Being truthful with one self.

To listen is to learn.

Every day, listening to discover new sounds, new harmonics, from around the world.

More than words, music is a universal language. It creates a bridge between objects and human beings.

To listen is to understand.

The music, the sounds of humans, of objects and nature, connects us to the deepest mysteries of existence.

Everything «speaks to us»; the songs of the whales, the wind in the trees, the streaming rivers, the waves rolling on the shore, the music of humans. This is only a small part of life’s partition; need we to remind this to ourselves?

Listen to a movie score without the images...

Now, watch a movie without the soundtrack.

A simple experience, which reminds us to what extent our ability to hear is essential.

Never forget this: if our ears do not have «ear lids» it is because Life has decided so. Sight, so favored today, is actually "framed". Our audition stretches like a sphere around us, and reaches a lot further.

For many of us in this industrial world, whose lives are alienated, disconnected from nature, to listen is to live again.

Practically, how does this all apply to High-Fidelity ?

We should cease dissecting sounds for the pure fascination of it. This pleasant and somewhat justified exercise should not be a means to an end. Our main guideline should be the ability of our sound systems to help us experience and assimilate the emotions and teachings contained in the music.

To reach this, a listening methodology becomes handy.

A good start is to develop one’s ability to integrate notions of objectiveness, subjectiveness, orderliness and poetry. For guidance you can consult our «Literature» section where you will find a key book en d « Zen and the Art of Motorcycle Maintenance», an inquiry into values, by Robert M. Pirsig.

Many audiophiles choose their products based on highly subjective grounds (blind loyalty to brands, fashion, preconceptions on various technological choices) convincing themselves that they are being rational, and then, as good audiophiles they listen with their logical brain.

The reverse would be better:  let go of emotions when in front of the products. They are only technical objects, sometimes beautiful mind you, but first and foremost designed to serve the form of Art that is the Music.

Our civilization often wanders into excessive fascination for technological objects. It is common behavior for spoiled and lost kids to focalize on what they have rather than on what they are.

Putting together a system should be made in a calm, rational and simple manner. One should evaluate a component the same way they would evaluate a piano or…a nice meal for that matter.

When choosing a piano for example, would one ask what is the tension applied to the strings, what brand of felt is used for the hammers or at what temperature was the varnish applied?

The buyer plays the piano, listens and decides. For the meal the same applies. Does one need to ask the Chef his knives or oven brand, or if he started by cutting the vegetables? No. The global evaluation is made upon the final result.

When listening to sound components, we should focus on their ability to make our senses come alive. Music should stir emotions, transport us, teach us, sweep our worries and much more…

We must be in tune with our emotions, open minded and available. The secret is to evaluate a system with a musician mental language rather than an audiophile language. When focused on dissecting the high frequencies range for example, we are not connected to the musical content, but rather to its "surface".

To achieve this, the best option still resides in regularly attending live music concerts. Should access to a good concert hall be out of reach, a simple street musician will do the trick.

As in all genuine quests, the search for a sound system is a never-ending process. As Taoists would say, the goal is not as important as the magnificent journey leading to it!

The Art of Listening is a text I wrote in 1980... considering the raising obsession for technology, I believe it is still very valid...

Top of the page.